RESEARCH TRIANGLE PARK, N.C.  , May 23, 2022 /PRNewswire/ --  Asklepios BioPharmaceutical, Inc. (AskBio), a wholly owned and independently operated subsidiary of Bayer AG, today announced that Dr. Katherine High, President of Therapeutics, received the Jerry Mendell award for Translational Science from the American Society of Gene and Cell Therapy (ASGCT).  Recently inducted as a member of the National Academy of Sciences (NAS), Dr. High has received this award in recognition of her significant contributions to the field of genetic medicine. 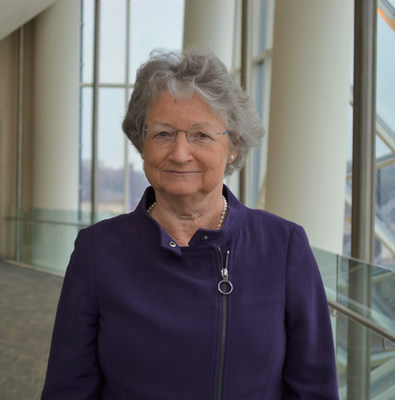 "I am honored to receive this recognition from ASGCT," said Dr. Katherine High. "I have dedicated my career to building the translational science that enables us to move scientific discoveries to new medicines for patients.  I look forward to furthering this work at AskBio and with our many partners to find the answers for devastating diseases that currently lack disease-modifying treatments."

Dr. High joined AskBio in 2021 and is internationally recognized for her pioneering bench-to-bedside research and clinical success for the clinical translation of genetic therapies for multiple inherited disorders.  Most notable, while serving as the Inaugural Director of the Center for Cellular and Molecular Therapeutics at Children's Hospital of Philadelphia (CHOP), Dr. High led a multidisciplinary team of scientists and physicians to spin out Spark Therapeutics, where she led the team that achieved the first U.S. Food and Drug Administration approval of a gene therapy for a genetic disease. Today, at AskBio, Dr. High oversees a robust pipeline of gene therapeutics to treat various neuromuscular, central nervous system, cardiovascular and metabolic disorders, all at various stages of clinical development.

"As a true pioneer in the field, author of more than 200 scientific papers with multiple patents in gene therapy, Dr. High is one of the most accomplished persons in gene therapy today," added Sheila Mikhail, co-founder, and Chief Executive Officer of AskBio. "I am privileged to have her on our team and, on behalf of all of us at AskBio, we congratulate her for this esteemed award and her continued accomplishments in genetic medicine."

The Jerry Mendell Award for Translational Science award is named for Jerry Mendell, MD, the first person in collaboration with Askbio co-founder Dr. R. Jude Samulski, to study viral mediated gene therapy for muscular dystrophy in humans and recognizes the extensive work required to bring gene and cell therapies to clinical trial. Mendell was also the principal investigator who brought Zolgensmaâ, a gene therapy treatment for Spinal Muscular Atrophy that uses the recombinant adeno-associated virus (rAAV) vector technologies created by AskBio founder and Chief Scientific Officer, Dr. R. Jude Samulski. It is also the same technology that is used for Luxturnaâ, the FDA approved gene therapy brought to market by the team led by Dr. High while at Spark Therapeutics.

Asklepios BioPharmaceutical, Inc. (AskBio), a wholly owned and independently operated subsidiary of Bayer AG acquired in 2020,?is a fully integrated gene therapy company dedicated to developing life-saving medicines that cure genetic diseases. The company maintains a portfolio of clinical programs across a range of neuromuscular, central nervous system, cardiovascular and metabolic disease indications with a clinical-stage pipeline that includes therapeutics for Pompe disease, Parkinson's disease, and congestive heart failure. AskBio's gene therapy platform includes Pro10™, an industry-leading proprietary cell line manufacturing process, and an extensive capsid and promoter library. With global headquarters in Research Triangle Park, North Carolina, and European headquarters in Edinburgh, UK, the company has generated hundreds of proprietary capsids and promoters, several of which have entered clinical testing. Founded in 2001 and an early innovator in the gene therapy field, the company holds more than 750 patents in areas such as AAV production and chimeric and self-complementary capsids. Learn more at?www.askbio.com?or follow us on?LinkedIn.

About Bayer
Bayer is a global enterprise with core competencies in the life science fields of health care and nutrition. Its products and services are designed to help people and the planet thrive by supporting efforts to master the major challenges presented by a growing and aging global population. Bayer is committed to driving sustainable development and generating a positive impact with its businesses. At the same time, the Group aims to increase its earning power and create value through innovation and growth. The Bayer brand stands for trust, reliability, and quality throughout the world. In fiscal 2021, the Group employed around 100,000 people and had sales of 44.1 billion euros. R&D expenses before special items amounted to 5.3 billion euros. For more information, go to www.bayer.com.